Today we take a look at Nicole Boyd. Who is Nicole Boyd, you may ask? Well you may not know her by name, but you probably know of the man in her life if you were or a big fan of MTV’s franchise Jackass, as her husband is none other than the famous Bam Margera.

Say what you want about Bam, he can be a little bit too much at times (personally, we’re bigger fans of Johnny Knoxville and Steve-0), but you can’t argue that this guy can pull some serious tail. Take a look at his lovely lady, Nicole, in the photo below. 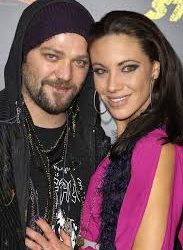 Of course, if you are dating a star of the Jackass tv series and films, you probably aren’t the cleanest cut girl yourself, as she has been in a little bit of trouble herself over the years. We did a quick Google search for info on Nicole and on the first page we found a headline about the time she got a DUI and wrecked Bam’s Porsche. That’s quite an expensive night out of drinking. Sure, Bam is famous for wrecking things (but you have to imagine it’s part of the production budget) including his own body, but still he’s gotta be pretty pissed to see such a sweet car get wrecked because of such a dumb decision. Especially after what happened to his close friend Ryan Dunn who died in a fiery crash with alcohol involved.

Nicole is a bit of a celebrity herself, though on much lower scale, as she describes herself on her social media profiles as a model, actress, photographer and jewelry designer. You can find her with all the other hot girls of Instagram under the screen name nikkib124. We took a look at her photos and damn Bam has got himself a great girl. Not that we’re here to be talking about that, but her art and jewelry designs are pretty cool too. Maybe get the girl im your life to like you more by buying or creating something like these? 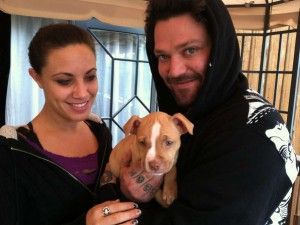 There’s little other information about her on the web, other than her association with Bam. You can find info about her wedding, apparently they went to Iceland where her husband’s band was on tour. They got married in front of a lot of rock fans at the Random Hero Festival in Reykjavik. Gotta admit, that’s a pretty rock star way to get married. I wonder how he won over her parents? Have they seen the stuff he’s done on TV and in his movies? Pretty brave people giving over their daughter’s hand to such an out of control individual, though we don’t really know how he is in real life and how much of it is for the camera.

Anyway, a pretty smoking chick for a pretty cool guy, and since this is Bam’s second marriage we hope he’s found a love that will last with this one! She may be just the right amount of crazy to be perfect for him.