There’s a lot of places that can be good for hitting on girls, and the gym is one of those. But before you interrupting someone during their workout, there’s a few things you should know about picking someone up at the gym. Follow these tips and you’ll be getting a girl to like you in no time.

How to Flirt at the Gym

The first you thing you should do is become a regular. For starters, considering if you’re putting in consistent time at the gym, you’ll have the body to show for it. You’ll feel better and look better and be more attractive. Secondly, people tend to go to the gym at the same time, on a schedule. If there’s a hot girl there during the time that you go, she’ll recognize that you’re there often as well and develop a bit of familiarity. If you see her checking you out just as much as you look at her, that’s a clue she likes you too. You’ll be less of a stranger that way, and you’ll have more opportunities to approach her. You can also see what classes she’s taking and sign up for them. Before and after a class is the best opportunity to chat her up with something innocent, perhaps comment on how tough that spin class just was and you’ve broken the ice.

Don’t Make Comments About Her Body

Sure, she’s probably wearing something tight and form fitting, but that doesn’t mean it’s an invite to pay her a compliment about her body. That will just make her think you’re into only one thing (even if that is the thing on your mind, don’t be so transparent about it). Instead, make a compliment on her outfit. Perhaps she’s wearing a racing t-shirt. Ask her about it, how she did, if she’s entered in any races in the future. Maybe you share a common interest in running or some other competition. Ask where she got that outfit and that you have a sister who is looking for some apparel just like that. She won’t be put on the spot and it’s a good way to initiate conversation and see if you have something in common. Maybe you’ll have so much in common it’ll lead to something special and soon you’ll find yourself on a weekend getaway! 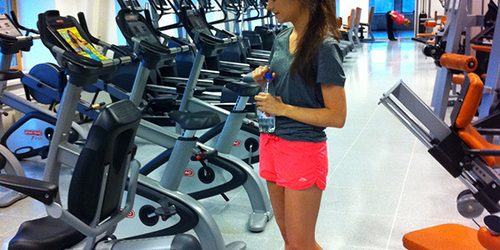 Ask Her For Help

Perhaps you’re about to do a heavy bench press and need a spotter. What easier way to initiate a conversation than to ask her to spot you? You’ve broken the ice so easily, and she’ll love that she’s able to help out (and that you asked her instead of another guy). Or maybe you’ve seen that she’s a fan of the elliptical. Sidle up on the empty one next to her and ask her what all the buttons do. She’ll be happy to be of service and help you with a smile. If you’ve seen that she’s going to a certain class, catch her when she comes out and ask how it was and if she recommends it. The key is to have an innocent way to strike up a conversation without being very aggressive, so asking her for help or advice is a great way to do this.

All in all, the key is to just be your friendly self and not put her on the spot. So scope out that hard body you have your eye on and just go talk to her! After you’ve broken the ice, ask her out on a date like a sporting event!