All guys love sports, and if you’re lucky enough, perhaps you’ve found a girl that loves sports too (perhaps you met the girl at a gym, she’ll definitely be interested). Going to a sporting event can be a great way to have a date night. The first rule is, however, to know your date. Is she looking for some hard hitting action like a football game or a hockey game? Or something more graceful like a soccer game or a big golf event?

If your girl loves sports, all the better – she’ll enjoy it just as much as you. If she’s less sports inclined, she may love taking part in your interests, and you can show off your knowledge while you explain what’s happening in the game action, the rules of the sport, who to cheer for, etc.

No matter the case, here’s a list of the top sporting events to bring a date to.

The biggest advantage of taking a girl to a baseball game is the pace of play is very slow, allowing you a lot of time to chat and enjoy each other’s company. There’s also a lot of rules that can be confusing, at least in terms of the strategy of the game, so you can help explain some of the more intricate points of play. Baseball can also be much lighter on the wallet than other sports, especially if you’re sitting up somewhere in the bleachers. If your girl loves beer, it goes hand in hand with this sport. Sometimes there’s nothing better than taking in a ball game with a cold beer and a bag of peanuts. As baseball doesn’t play in the rain, you don’t have to worry about inclement weather and enjoy a nice sunny day at the ballpark. If you’re so inclined, maybe invite her sports-loving dad and win over her parents that way. 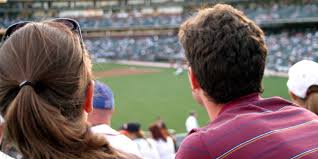 Some girls like the violence of the sport, seeing men throw their bodies all over the place to make a tackle (plus their butts look pretty good in those football pants). Football also has much more noticeable stars than other sports, with how much they are endorsed in mainstream media, and your girl may have a crush on a top QB like Tom Brady or Aaron Rodgers and cheer for them. Heck, even Travis Kelce has his own dating show now modeled after The Bachelor. Another advantage is that football is played on the weekends, with college on Saturdays and NFL on Sundays, so it’s easy to schedule some weekend time together. And what’s better than spending time before the game throwing back some drinks at a tailgate? Girls love any reason to party, and perhaps the beer will make her horny for later.

This list isn’t complete without hockey on it. The biggest benefit here is that this game is played indoors, so weather isn’t a factor. Of course, it’s also played on a cold sheet of ice so it’s going to be rather chilly in there, but she can wear her favorite cute sweater. There’s something about the speed of play and the sheer skill of the players that make this a fascinating sport for any spectator. And you can’t top the excitement in the crowd when a fight breaks out on the ice!

Bring your date to one of these games and perhaps you’ll be lucky enough to end up on the Kiss Cam!