Tom Cruise has been one of America’s heartthrobs ever since he burst onto the scene in the early 80’s dancing around in his underwear to some Bob Seger in “Risky Business”. The man just doesn’t seem to age and still has ladies fawning over him whenever he makes appearances or comes out with a new Mission: Impossible movie.

He has no problem getting women to like him. He has been married three times to some absolutely gorgeous women such as Nicole Kidman and Katie Holmes, but sometimes there just seems to be something off about him, like these relationships may be a beard for what really lies underneath. By “something off”, we don’t mean his ties to Scientology which has led to some pretty bizarre outbursts, rather we mean that it may not be all that it seems when it comes to his sexual preferences. 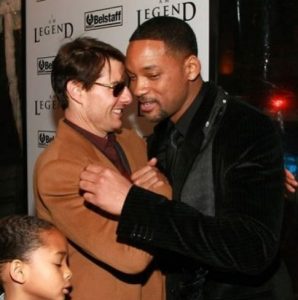 Do You Think Tom Cruise is Gay?

While we’re not saying that he’s gay, here’s a few things that just seem a little weird for a straight man that makes you wonder.

Tom has always been a huge part of tabloid fodder, and when it’s not focusing on his ties to Scientology, there are a lot of rumors about his sexuality. We’re not saying that any of this is true, but many point to his sexuality as the source of his many failed marriages. There are talks that his marriages, especially his most recent one to Katie Holmes, that she wasn’t really into him and it was a contract marriage and ended in divorce simply when it ran its course. There was no reason given officially or their divorce, so it does make you wonder.

There have also been rumors, in a famous tabloid feature, that Tom is actually gay with fellow Scientologist John Travolta. Apparently the tabloid claimed that they were acting in a manner that was very unusual for what they are known for, and went so far as to say that they had been in a secret romance for as long as three decades. The story had a photo of the two famous actors with Travolta’s wife, Kelly Preston, looking none too pleased. The gossiper questioned why the two stars were so unusually close and what possible secrets Kelly knows about it. 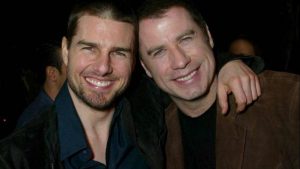 Beyond the tabloid suspicion with Travolta, there are also many gossip sites littered with men who have claimed that they’ve actually had sex with Mr. Cruise. Of course, all of these “sources” remain anonymous so it’s hard to put any stock into their allegations to determine if they’re really true or not, or whether it’s just a tabloid making things up to sell some more papers.

Overall, while it is a common speculation among the gossip rags, there is no substantial evidence to say that Tom Cruise is gay, and we’re chalking it up to just tabloid fodder. These kinds of magazines and newspapers thrive on the rumor mill and making outrageous claims to bring more eyeballs to their publication, and nothing whets the public’s appetite more than sexy rumors about our favorite stars. For a man that has no problem meeting women, I don’t believe the rumors. What do you think – is Tom Cruise gay or is it just rumor?